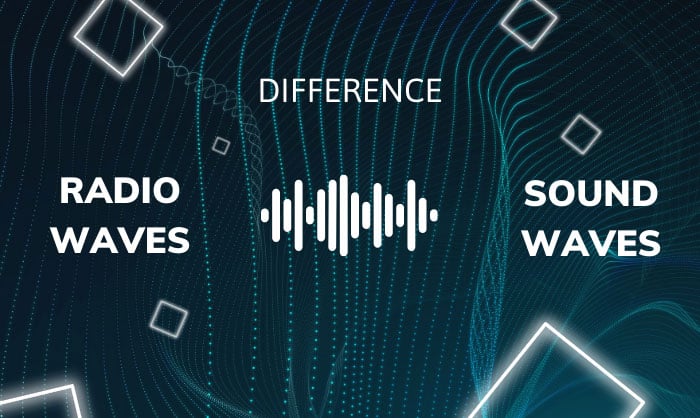 At least once in our life, we have all heard the concept of “waves.” However, it is hard to distinguish between sound waves vs radio waves. Besides, reading definitions of them online is way too academic and complex.

Since both these waves play essential parts in our daily lives, it’s interesting to know what differentiates them and the right circumstances to use them. To help you solve this question, we’ve made a thorough comparison that reveals the difference between radio waves and sound waves.

First things first, both waves produce sound. Both waves have a wavelength, frequency, and velocity and transport energy from one location to another. But sound waves travel at a considerably slower speed than radio waves.

When you use a radio, it receives radio waves, processes them, and changes them into sound waves, which you hear in the form of music or speech.

So, let’s dig into the following information to clarify what are radio waves and sound waves. 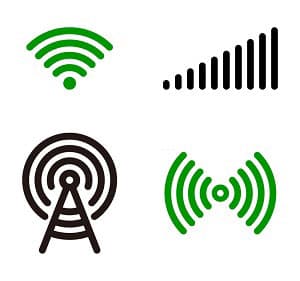 A radio wave is an electromagnetic wave and is the fundamental component of radio communications. A cycle is the full pattern of a wave before it repeats itself. The wavelength is the amount of space it takes for a wave to complete one cycle.

According to NASA, frequency refers to the number of cycles (or times) a wave repeats in a second. The unit of frequency is hertz (Hz). A kilohertz (kHz) is one thousand Hz; a megahertz (MHz) is one million Hz, and a gigahertz (GHz) is one billion Hz. The radio spectrum is defined as a band of frequencies ranging from 3 kilohertz to 3000 gigahertz.

Radio waves are made from transverse electric and magnetic fields. They don’t need a medium to move in; this is how light from faraway stars reaches us via space. 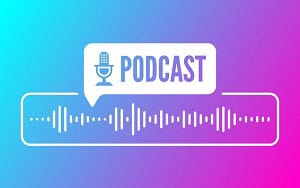 A sound wave is a mechanical longitudinal wave. It is a pattern of disruption generated by energy moving through a medium (such as air, water, or any other liquid or solid substance) as it propagates away from its source. The vibration upsets the particles in the surrounding medium, which disrupts the particles adjacent to them, and so on.

Like waves of saltwater in the ocean, the disturbance pattern causes outward movement in a wave pattern. The wave conveys sound energy across the medium in all directions, and generally less powerfully as it goes away from the source.

Sound waves are longitudinal rather than transverse, and they involve the movement of a substance. So they’re a series of compressions and rarefactions in waves.

The Main Difference Between a Radio Wave and a Sound Wave 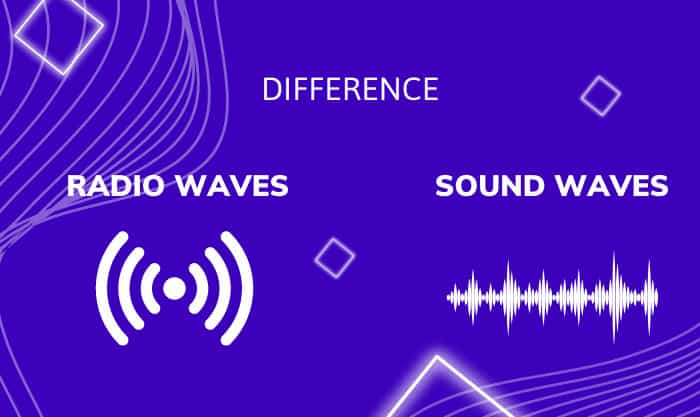 Radio is the lowest frequency part of the electromagnetic spectrum, with wavelengths ranging from 1 millimeter to 100 kilometers and frequencies ranging from 300 GHz to 3 kHz.

Radio is divided into several divisions. AM and FM radio are two of the most popular sources for radio waves. Natural sources such as lightning and celestial occurrences can also create radio waves, as can artificial sources such as broadcast radio towers, mobile phones, satellites, and radar.

The human ear can perceive sound waves with frequencies ranging from roughly 20 Hz to 20.000 Hz. Sound waves are made of the vibration of material objects. The source of sound waves can be a vibrating object, such as a ringing phone or a person’s vocal cords.

An object’s vibration will cause the molecules in the air around it to move and transmit through the medium. And then, when these molecules collide with the nearby molecules, it forces them to vibrate and generate sounds.

A sound wave’s speed is defined as the distance it travels per unit of time as it propagates through an elastic medium. However, the speed is different in different substances: sound travels the slowest in gases, quicker in liquids, and the fastest in solids.

Radio waves travel at the speed of light and move at the same speed as all other electromagnetic waves: 3.00 X 108 m/s (186,000 miles per second). Therefore, radio waves can be absorbed, reflected, or transmitted.

In a vacuum, the precise number is 299 792 458 meters per second. However, the speed of radio waves is not constant. Instead, the electromagnetic pulses’ transmission velocity is determined by the sort of material they pass through.

Radio waves are utilized in various applications, including television and radio broadcasts, telecommunication, and satellite transmissions. Radio waves are easily transferred through the air. If absorbed by the human body, they do not cause harm, and they can be reflected to reverse their orientation.

Soundwaves are used in one of our daily activities: communication. Humans could not communicate verbally without them. They are also used as a way of ocean exploration or underground resource searching. In addition, many creatures, such as bats or dolphins, use sound waves for hunting.

Which is Better: Radio Waves or Sound Waves?

As you can see, both radio waves and sound waves contribute to humankind’s indispensable activities. Each of them plays a different role and brings different values.

Human society and science could not have developed to this day without either of them. Therefore, it is impossible to say which one is better or more important than the other.

Now you should have understood what radio waves and sound waves are, as well as the differences between them. We have also explained their roles in the development of human civilization.

Hopefully, this comparison of the difference between radio waves and sound waves gave you a satisfactory answer to your questions, and you explored some helpful knowledge. Don’t forget to share this article with the people around you and those you love, and revisit us on this site to learn more cool things.